The Four Abodes of Mindfulness There is the law of universe of old buddhas, it is, namely, the teaching, practice, and realization of the thirty-seven items of bodhi. The entanglement of ascending and descending classes, is still the fundamental law of the entanglement. We call it the buddhas and we call it the patriarchs.

In general, the principle of observing the bright star at midnight is expressed as the observation that the body is not pure. It is not the critical comparison of purity and impurity. This existing body is not pure. The real body is not pure. In studying like this, when demons become buddha, they twirl the demon to defeat the demon and to become buddha. When buddhas become buddha, they twirl buddha to make buddha and to become buddha. When human beings become buddha they twirl human being, regulate the human being and to become buddha. We should study thoroughly that there is surely the way of things through in the spot of twirling up. For example, it is like the way of washing a robe. Water is dirtied do not liger on a rest. We used up water and use the other water to wash. The robe becomes clean and we still carry on washing the robe. We use many kinds of water, which is suitable for washing robes. We should study thoroughly the truth that when water is not pure, we know that there may be fish. As for robes many sorts of robes are completely washed. Taking suchlike effort, the law of washing robes is realized. All the same, we see what purity is. This principle is that permeate the robe with water is not necessarily the true meaning and to dirty water with the robe is not the true meaning, in using dirty water to wash the robe, the truth exists. There are also ways of washing robes and washing things, by using fire, wind, soil, water, and space. And there are ways washing earth, water, fire, wind, and space by using earth, water, fire, wind and space.

The principle of this observation that the body is not pure is also like this. Depending on this, whole of body, whole of observation and whole of being not pure are just Kasaya to which a mother gives birth. If a Kasaya is not this Kasaya to which a mother gives a birth, Buddhas patriarch never use it. How could Sanavasa be only one? We should carefully keep it in mind and study perfectly to go thoroughly.

To say that the observation that feeling is suffering is that suffering is feeling. It is neither one’s own feeling nor the other’s feeling, it is neither existent feeling nor nonexistent feeling. It is the feeling of the living body, it is the suffering of the living body. It is to replace sweet ripen melon by bitter gourd, which is bitter to the skin, flesh, bones, and marrow. It is evenly bitter to the conscious mind and the unconscious mind. This observation is one of the divine practices and enlightenment. It is the divine practice and enlightenment which springs out from the calyxes and springs out there are suffering sentient beings, ultimately it is impossible to deceive others. Although sweet melons are evenly sweet to their calyxes, and bitter gourds are totally bitter to the roots, suffering should not be easily groped. We should ask ourselves, what is suffering?

The observation that mind is impermanent. The old Buddha Sokei says “Non constancy is the Buddha- nature.” Therefore, non-constancy understood by various things is also the Buddha nature. Great Master Yoka Shinkaku says, “All things are impermanent, all is empty. Just this is the Tathagata’s Great and Perfect realization.” The present observation that mind is non-constancy is the Tathagata’s Great and Perfect realization, and it is the great and perfect realized Tathagata. Mind, even if it intends not to observe, it follows the others, therefore, if there is mind, there is also observation. On the whole, reaching the Supreme Truth of Bodhi, the Supreme Right realization is, namely, non-constancy and the observation of the mind. The mind is not necessarily constant, because it separates the four corners; tetralemma, existence, nonexistence, both existence and nonexistence, neither existence nor nonexistence, and surpasses the hundred negations, so, fences, walls, tiles, pebbles, and stones, large and small, these are the mind, and are non-constancy, and are precisely observation.

Shakyamuni Buddha says “All buddhas and bodhisattvas rest in this dharma forever, which is a sacred womb.” 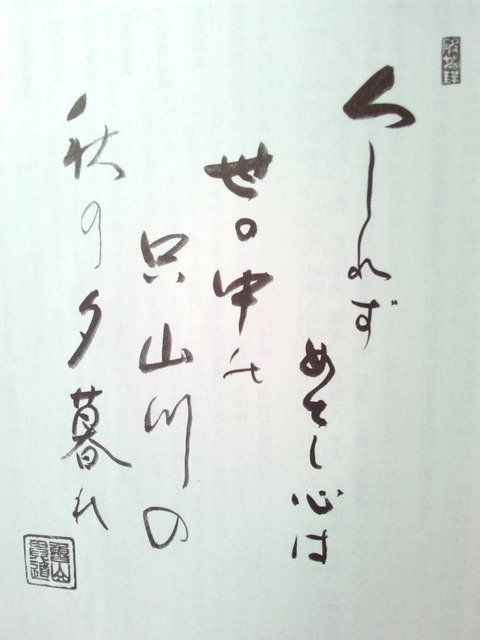